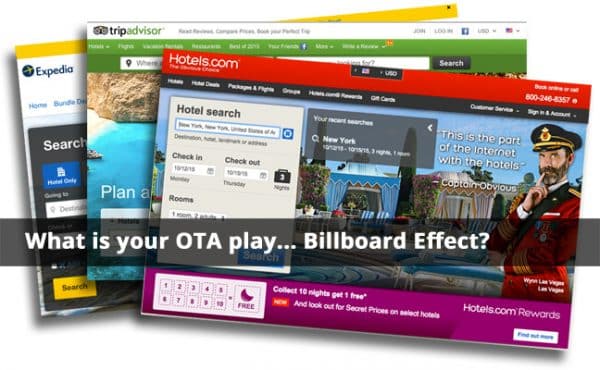 Smaller properties of 6-20 rooms can be reluctant to maintain a presence and room inventory on OTAs like Expedia and TripAdvisor.  But are they shooting themselves in the foot?  Both the “Billboard Effect” and the “Pay to Play Effect” do indicate that you’re leaving money at the table.

The Billboard Effect:  Did you know that industry studies show using OTAs increases room reservations — at your own site?  According to an article on Hotel Business Review, “…Cornell Professor Chris Anderson found that a hotel’s direct bookings increased from 7.5 to 26% when listed on Expedia, perfectly illustrating the impact that the billboard effect has on a property’s direct bookings.”

It works like this… a prospective guest sees the generic site they create for you on Expedia or Hotels.com or TripAdvisor (your “billboard” on that platform), then leaves the OTA site to book at your own site, assuming you are set up for smart on-site booking and mobile ready.  Sure, you’ll pay some commissions to OTAs for guests that do book there, but doesn’t the billboard effect make it worth it?  In other words, instead of only thinking about the 15% you lost on those reserving on the OTA, calculate the added bookings you also get without paying commissions.  We like the relatively simple myallocator system that is integrated into Checkfront online booking for managing OTA room inventory so you don’t double-book (while Checkfront is our preferred cloud booking solution for a lot of reason and we have a marketing agreement with them, we can and do work with other systems).

Let’s run some numbers, for this scenario:  say you’re a small boutique hotel with 18 rooms that average $120 per night.

These are rough numbers.  But since both effects will increase your annual gross revenues, it seems like a win-win — right?  Do leave some comments below if you have a different take on this. 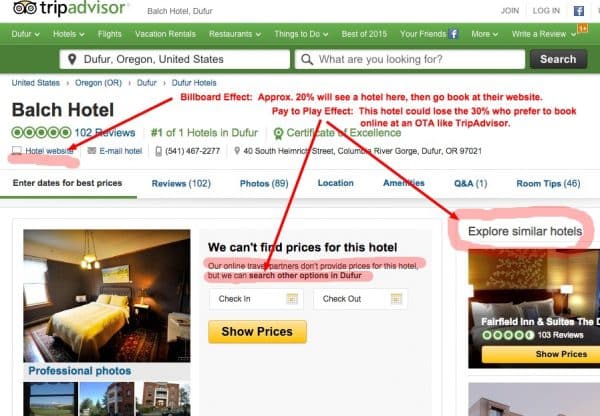 On the one hand, this hotel can get a boost from the “billboard effect”… but on the other it could lose up to 30% in potential bookings.

The Pay to Play Effect:  I think most innkeepers and hoteliers are familiar with this one, and it irritates some of you.  Successful online travel search sites like Trip Advisor, may list your property even if you are not “paying to play” — dialed into their commission or pay per click fees.  That is ok for the “billboard effect”, but what about the 30% or so that DO book at online travel sites (Trip Advisor reported in 2013 that “28 percent prefer to book via Web-based travel agencies,” and we expect that number to rise)?  Well… in the case of Trip Advisor, if you don’t pay (sign up for their Instant Booking or Cost Per Click programs) they instantly recommend other competitors who do allow booking on their site.  No pay = no play, and no bookings from those that prefer to book while they are at the OTA.

I think you’ve seen that using both of these “effects” can be a powerful revenue generator for your property.  One last word of advice — get professional photography in place on your OTA pages that not only shows the property itself, but any events (ie. weddings), and people pictures (guests enjoying a tasty breakfast, etc.).  Smiles that express feelings of relaxation, happiness and satisfaction work very well.  Sell with emotion.  When you get an “emotional handshake” with smart pictures and content you will increase your business.