Welcome to the twilight zone.  An Artificial Intelligence (AI) is in charge of search returns now, when you use Google. You can’t control what it does.  What does this mean for content marketers? 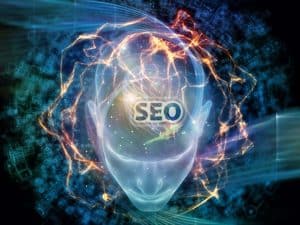 Ready to meet an Artificial Intelligence? You already have — every time you do a Google Search you are working with one.

Google calls it’s AI, “RankBrain”, and while only an infant, it already thinks for itself.  That’s called “machine learning.  According to a recent SearchEngineLand.com (SEL) article, “Machine learning is where a computer teaches itself how to do something, rather than being taught by humans or following detailed programming.”

According to wikipedia, “RankBrain is a machine learning artificial intelligence system, the use of which by Google was confirmed on 26 October 2015. It helps Google to process search results and provide more relevant search results for users.[1] In a recent interview, Google commented that RankBrain is the third most important factor in the ranking algorithm along with links and content.”

SEL also reports that all of a sudden, RankBrain is the 3rd most important “ranking signal.”  What are ranking signals?  Again, from that SEL article, “Signals are things Google uses to help determine how to rank webpages. For example, it will read the words on a webpage, so words are a signal. If some words are in bold, that might be another signal that’s noted. The calculations used as part of PageRank give a page a PageRank score that’s used as a signal. If a page is noted as being mobile-friendly, that’s another signal that’s registered.”

“There are over 200 different ranking factors[4] which make up the ranking algorithm, of which their exact functions in the Google algorithm are not fully disclosed, so it is impossible to know with 100% certainty. The general consensus is that RankBrain interprets the user searches to find pages that may not have contained the exact words that were used in the user search query.” — Wikipedia entry for Rankbrain 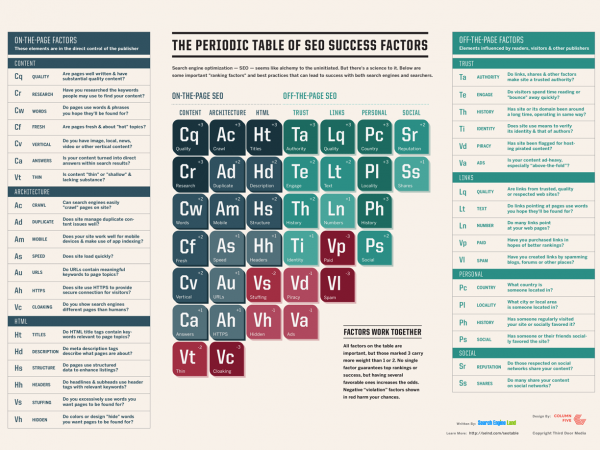 Feed the RankBrain: The above chart (click to enlarge), along with other research, form the evolving models for best SEO practice we follow (produced by SearchEngineLand.com).

We asked our resident SEO Expert, Julie Hume, what she makes of the RankBrain impact on SEO these days:

In the relatively short time since its deployment, RankBrain has quickly risen to become Google’s third highest ranking factor. Initially, it was launched to handle the 15% of new searches that Google had never seen before but it clearly did a stellar job because now RankBrain is used “…to process every query that the search engine handles, and the system is changing the rankings of lots of queries.” Wow. Talk about coming out of left-field.

Realizing the influence of RankBrain and that it is not going to go away, you might think, well, let’s just optimize for RankBrain. And that right there is the kicker. You can’t optimize for RankBrain.
There are no direct ways to optimize for RankBrain but what you can do is make sure the content on your site is written in natural language, that it serves the searchers’ intent and that visitors engage with and interact with your site. Which is what Google have wanted all along isn’t it –  less artificial ranking signals and more quality content.  Well played Google, well played. — Julie Hume

Recently a couple of clients have asked us about our SEO education (it is always continuing), why we mention it less than CRO — Conversion Rate Optimization (CRO is newer, not as well known, and we just wrote a book about it), and how we stay up to date on SEO.  There are a few ways we stay up to date including reviewing leading research models like the infographic from SEL at right (click to enlarge), and MOZ survey of SEO professionals with a polling of top ranking factors in their work.

What does this mean for your SEO success these days?

So… how do we put this all together for our clients?  First, Google continues to stress that we should all worry about good, relevant content first, and let it worry about the science behind its machine intelligence.  This has been true even before computers — in marketing communications, quality content wins every time.  In addition we take the following steps: